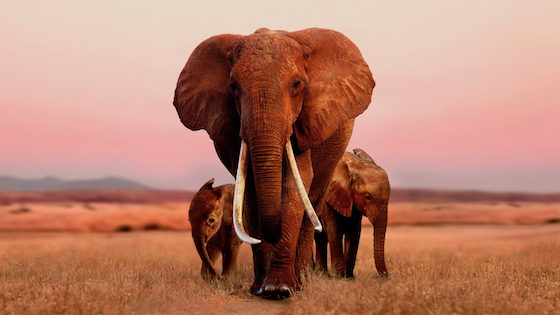 THE ELEPHANT QUEEN plays as part of the Spectrum program at AFI DOCS at the Landmark E Street Cinema in Washington DC on Saturday, June 22 and at the AFI Silver Theatre in Silver Spring, MD on Sunday, June 23. Directors Mark Deeble and Victoria Stone will be in attendance. Buy tickets to the screening here.

The nature documentary is one of cinema’s oldest and most technically refined genres of nonfiction storytelling. Focusing on a single elephant family and the matriarch at its center, this film gives us an incredibly intimate look at the lives of elephants. Over the course of one dry-to-rainy season, the family undergoes an adventure at once momentous and mundane.

With tragedy and triumph lurking everywhere, the family confronts multiple obstacles on the way to finding refuge at a life-saving waterhole. It’s an epic trek they repeat every year. With intense emotional twists and incredible photography, it’s no wonder this has been one of the most highly acclaimed and beloved films of the year.

Mark Deeble and Victoria Stone are a filmmaking duo known for THE QUEEN OF TREES (2005), NATURE (1982) and NATIONAL GEOGRAPHIC EXPLORER (1985). Deeble is a cinematographer and director, and Stone is a producer and director. AFI spoke with them about their new film THE ELEPHANT QUEEN.

AFI: How did you come to pursue documentary filmmaking?

We’ve always been passionate about telling stories from nature and grew up on a diet of Alan and Joan Root films. Their mastery of storytelling, humor and natural spectacle was inspiring. Our training in zoology and fine art photography gave us the skills we needed to start, and we became self-taught wildlife filmmakers.

AFI: How did you become interested in this story and what was your inspiration for THE ELEPHANT QUEEN?

We’d never filmed elephants before as the main subjects but over three decades they’d had tangential roles in our films. Then, in 2009 a drought in Amboseli opened our eyes to the elephant’s sentience, empathy and intelligence. When we saw how the matriarchs held their families together as they coped with such harsh conditions and the loss of their calves, we knew we had to tell their story.

AFI: How did you find and connect with the elephants in your film?

It took us 18 months to find our “star” matriarch Athena — elephants were in an unfolding crisis at the time due to poaching for ivory. They were scared, nocturnal and impossible to film. It wasn’t until we moved our filming camp into a protected area, inside a national park, that we found a family that we could work with that had the right make-up of females and calves and a beautiful, charismatic matriarch. Our team searched for thousands of hours, but in the end, it was Athena who found us. She appeared one day, just outside camp, standing in the shade of a tree with her family, and we took that as an invitation to follow her.

AFI: What was a specific difficulty you faced while making the film?

Much of the behavior of the smaller characters was very seasonal and only happened for a few minutes in a year. That meant having members of our team out searching for the animals sometimes day and night for months on end. We spent four years filming and some of the behavior, like the bullfrogs mating, we saw only once, for a minute, in that period of time.

AFI: What do you hope viewers take away after screening your film?

We stand to lose elephants in the wild within a generation. We want the audience to have an emotional reaction to Athena’s story and fall in love with elephants — to feel that they are so like u and, that they want to help them. We want viewers to be aware of how the elephant’s world is so linked to the cycle of life in the wild and how the smaller animals depend on the elephants and the waterholes they make, and for the audience to feel that a world without them would be unimaginable.

AFI: Why is Washington, DC an important city to screen your film?

Washington is the U.S. center for wildlife filmmaking and home to policymakers and NGO’s who will help determine the future for elephants.

We need to hear extraordinary stories from our natural world if we are to grow an awareness and empathy for wildlife and what we are losing. We need to react with our hearts and our heads. The environmental attrition is appalling, and we are sleep-walking into a crisis of unimaginable proportions. Wildlife documentaries can help inform both the public and decision makers and help turn the tide.