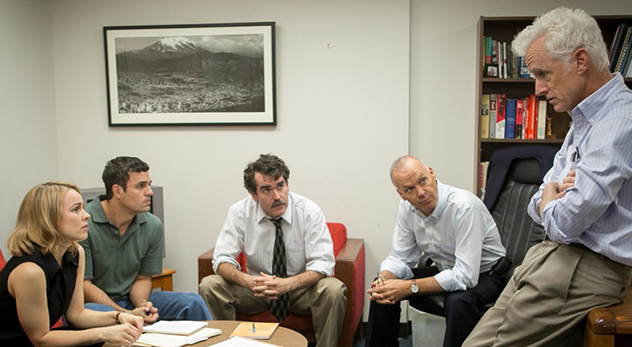 Congrats to AFI Conservatory Alumni on Their Oscar-Winning Films

AFI is proud to highlight the AFI Conservatory alumni featured in the 88th Academy Awards®, which followed an unprecedented awards season run for AFI graduates. Producer Steve Golin (AFI Class of 1981) received the Best Picture Oscar® for SPOTLIGHT. The film’s credits also include cinematographer Masanobu Takayanagi (AFI Class of 2002) with a special thanks to Pulitzer Prize-winning Boston Globe journalist Michael Rezendes (AFI Class of 1999), played by Mark Ruffalo in the film. Read our interview with Rezendes here.

Altogether, four AFI Conservatory alumni received a total of five Oscar® nominations. Below is the full list of AFI alumni who worked on this year’s Academy Award®-nominated films:

I was a guest when spot light received the Award and I noticed how audience loved it by many
applauding the film.I love AFI .It is a real cinema school

Congrats to all the Winners & Nominee’s of AFI … You all are the “Class” of our org. It just goes to show you that hard work, determination and of course … A little bit of luck … What can be accomplished ! !

Ever onward and
upward until the
journey has ended …

Congrats to all the Academy Award Winners & Nominee’s of AFI … You all are the “Class” of our org. It just goes to show you that hard work, determination and of course … A little bit of luck … What can be accomplished ! !

Ever onward and
upward until the
journey has ended …

Congratulations all who worked on “SPOTLIGHT”
these stories need to be told and you have done it so well.
Thank you AFI Conservatory for your training of so many wonderful film makers. D. Scroope.