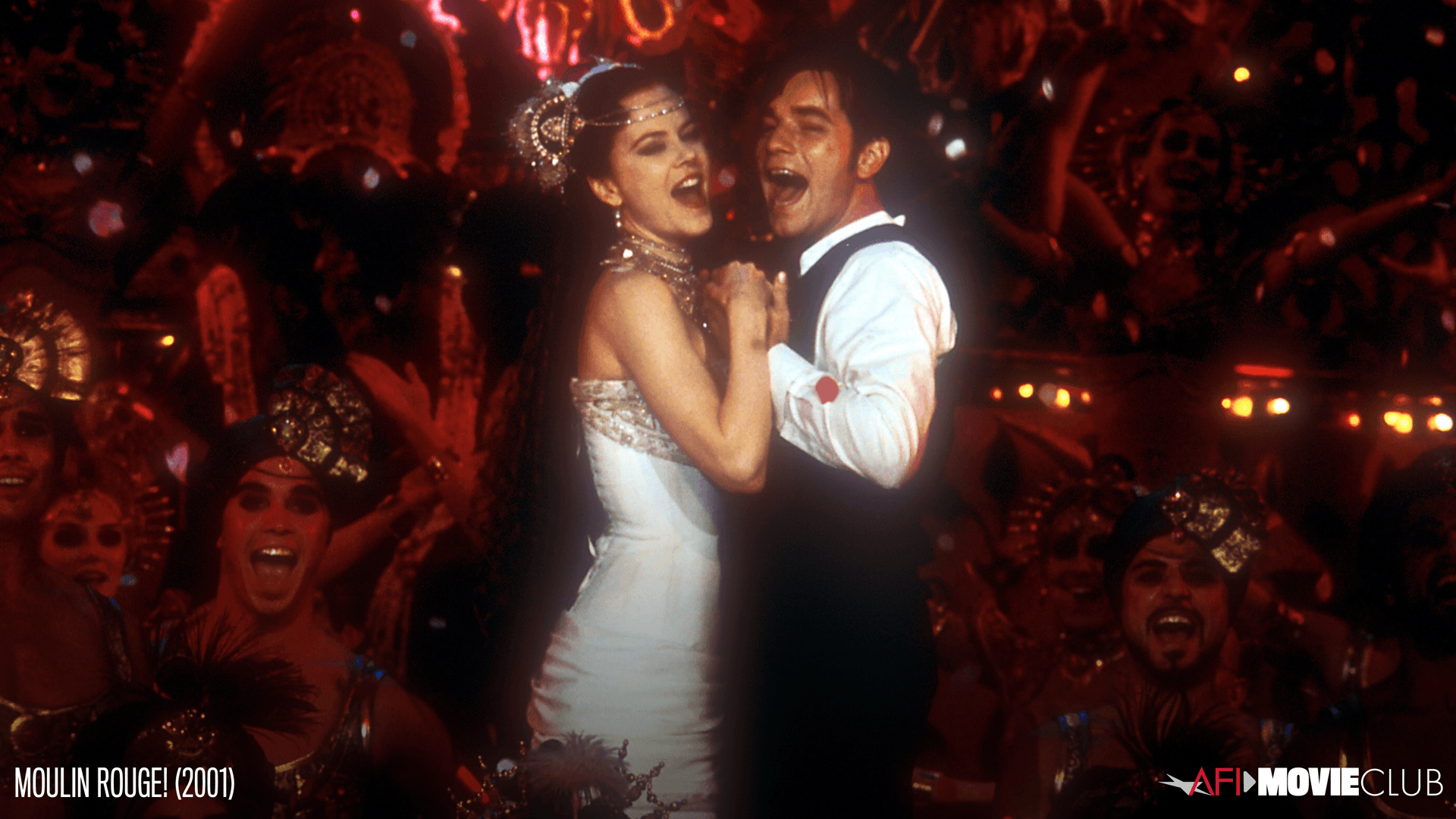 “This story is about love.” Nominated for eight Oscars®, including Best Picture and Best Actress for Nicole Kidman, and an AFI AWARDS Movie of the Year honoree, MOULIN ROUGE! is a dazzling extravaganza – a kaleidoscope of melodrama, soap opera and opera – that reinvented the American musical genre. Tell us which musical performance is your favorite using the hashtag #AFIMovieClub.

–DID YOU KNOW the real Moulin Rouge was a cabaret in Paris that opened in 1889 and is famous for being the birthplace of the can-can dance? It was also the first building in Paris to have electricity, which powered its dazzling, lighted facade.

–DID YOU KNOW Heath Ledger was initially considered for the role of Christian? It was decided that he was too young for the part and he was replaced by Ewan McGregor, who was eight years his senior.

–DID YOU KNOW that both Nicole Kidman and McGregor made their singing debuts in MOULIN ROUGE!?

–DID YOU KNOW the necklace worn by Nicole Kidman in the film was made of real diamonds and platinum – with more 1,300 diamonds and weighing in at 134 carats? It is the most expensive piece of jewelry ever made for a film at over a million dollars!

–DID YOU KNOW Nicole Kidman was originally cast in PANIC ROOM but had to be replaced because of injuries she suffered while filming the MOULIN ROUGE! dance sequences?

–DID YOU KNOW the film uses so much popular music that it took director Baz Luhrmann almost two years to secure the rights to use the songs in the movie?

Learn more about MOULIN ROUGE! at the AFI Catalog.

-While MOULIN ROUGE! takes place at the turn of the twentieth century, the songs in the movie were popular 100 years later, when the film was made. Why do you think the director chose to use modern music for a period piece and what was the effect?

-MOULIN ROUGE! tells stories within stories, such as Christian’s love affair with Satine and the subplot of “Spectacular, Spectacular,” the musical play in production at the Moulin Rouge. How were you able to tell the stories apart? What are some of the notable visual differences you see between the different stories? What are some similarities?

-How does MOULIN ROUGE! compare to other musicals you’ve seen?

-How would you rate MOULIN ROUGE?

Learn more on our FAQ page.

How to Watch MOULIN ROUGE! Now:

I always thought that the film was too busy, too baroque. And the songs out of historical context didn’t work for me. That would be something for, maybe a comedy, not for a big splashy musical. I know I’m in the minority on this film. I found it to be hard to sit through and totally forgettable. Sorry to be a spoil-sport.

Moulin Rouge is my all time favorite movie, no other movie even comes close. My favorite outfit is the one Satine wears on the swing while singing “diamonds are a girls best friend”. Favorite song, “Come what may”, which is also my favorite song. Favorite scene is Satine and Christian dancing on the roof under the singing moon.