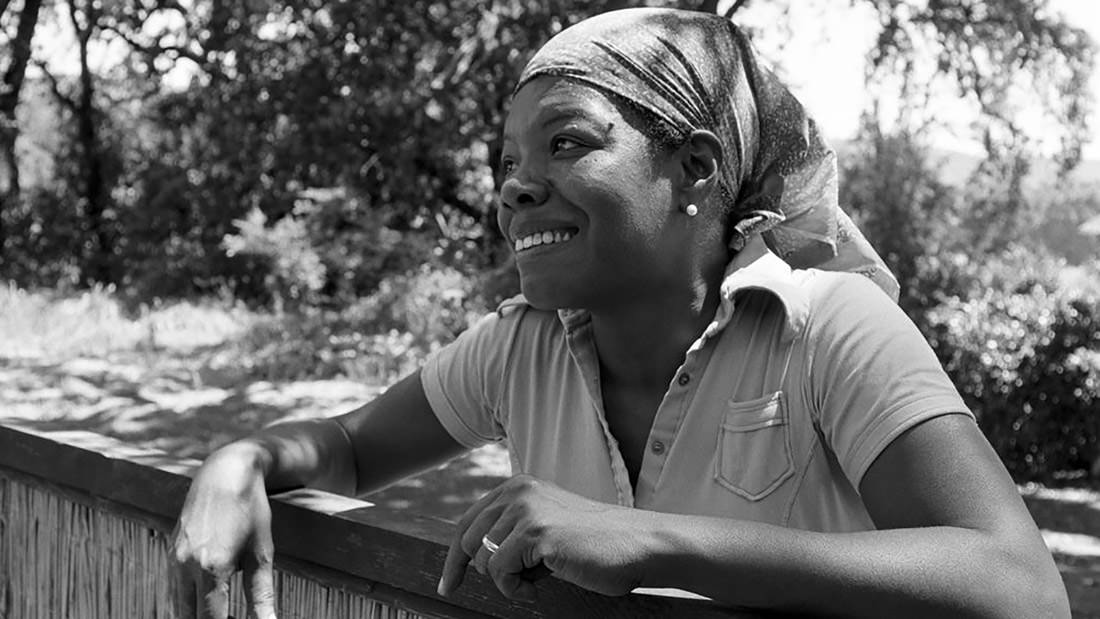 Co-directors Bob Hercules and Rita Coburn Whack present a lovingly crafted and stunningly comprehensive portrait of the esteemed Dr. Maya Angelou with MAYA ANGELOU: AND STILL I RISE.  The incredible story is told by Angelou herself, along with a remarkable cast of contemporaries from her careers as actress, writer, poet and activist.  In chronicling Angelou’s life from her youth in the Depression-era South through her rise to international prominence, the film is a vital document about the importance of grace, dignity and the quest for the peace.

AFI spoke to the filmmakers ahead of the film’s AFI DOCS premiere.

What led you to documentary filmmaking?

RW:  As a young African American girl in a south suburb of Chicago during the 1960s, I didn’t see myself, my family or my community in books, on television or at the movies.  Yet I heard our rich stories in the oral tradition and began to write.  As I got older, I found that plays, movies and television delivered a variant of truth and fiction to a waiting public.  I realized that the public hungry for stories that included my family and my community also included people that needed to know about us.  I find film to be the best way to tell many of the stories in our larger culture that beg to be told.

BH:  When I was a freshman in college, I saw the Vietnam War documentary HEARTS AND MINDS.  It had a profound effect on me and got me thinking for the first time about making documentaries.  I am drawn to the form because it connects my sense of social justice with my artistic sensibilities.

What inspired you to tell the story of Maya Angelou?

RW:  “I Know Why The Caged Bird Sings” was one of the first books I read with a black woman on the back cover.  Later, I interviewed Maya Angelou as a host of a public radio program.  Subsequently, I became her producer for Oprah Radio.  By then, I had built a career in both radio and television and had done several documentaries.  When I read all of her works to date in the 1990s in preparation for our radio interview, then later spent time working with her on Oprah Radio Show from 2006 to 2010, I knew I was listening to the history of our larger culture.  I approached her about filming a documentary.  Bob Hercules and I had a similar idea, having never heard of a documentary on Maya Angelou’s life, and a mutual friend introduced us.

BH:  I was first drawn to Maya Angelou when I read her book “I Know Why the Caged Bird Sings” in college.  Because of the poetry of that book and its specificity, it was an amazing window into the life of a Southern black girl — quite a revelation to a (fairly) privileged white, somewhat naïve kid at the time.  Later, I watched her read her thrilling poem “On the Pulse of Morning” at President Clinton’s inauguration and I was filled with pride.  When I discovered that no one had ever made a film about her, I was shocked.

Talk about your relationship with Maya Angelou while working on the film.

RW:  Dr. Angelou was alive when we began filming and suggested many of the subjects, including Alice Windom, her roommate in Ghana.  We wanted people that knew her in a way that would capture her humanity:  her son, close friends, people who would show her as a mother, a woman, a wife — areas about which the public would not be as knowledgeable.

BH:  It was a great honor to work with Dr. Angelou on this film.  She was always very courteous and respectful but not a person to suffer fools.  During the interviews, she had an amazing ability to go back to the time period she was describing and almost relive those moments, sometimes painfully so.  My only regret is that she will never be able to see the film.

What was an obstacle you faced behind the scenes?

RW:  Funding was a challenge and continues to be so as we do outreach and tour the film.  We have some wonderful private donors and foundations, but still lack all we need to get this film out to audiences that are less likely to view a documentary on public television.  I feel like I did as a child, trying to find work on my community — only this time I am also trying to find people to catch and spread the vision of this work to larger communities.

BH:  Besides the fundraising issues, the biggest obstacle was the sheer scope of the story and how to squeeze it into two hours.   Our strategy was to tell some significant stories in depth that are emblematic of her entire life and pass over other parts of her life.  We didn’t want to make a “list” film, but rather cover some stories at greater length and depth.

What do you want audiences to take away from the film?

RW:  Ultimately, I want them to be changed; to stop their own racist, sexist and abusive tendencies, which we all have; to be fairer and more inspired people.  Filmmakers are allowed and encouraged to believe that dreams come true or we would not make films.

BH:  I would like audiences to want to learn, in greater detail, what motivated Dr. Angelou to take the various paths she did and also to understand the context of the times she lived, since nothing happens in a vacuum.  Finally, I hope the film can serve as a source of inspiration for people.  By seeing how Dr. Angelou overcame the enormous challenges of racism, sexism and sexual abuse with grace and dignity, perhaps others can also overcome their own challenges.

Why is Washington, DC, a valuable location to screen your film?

RW:  Maya Angelou was the first African American woman to deliver a poem at an inauguration.  President Bill Clinton gave her that opportunity and it impacted the world. Her participation in the March on Washington and the school named after her that helps at-risk youth are all in DC.  She was so active in this nation’s structure and its capital gives us a platform to continue her legacy through the film.

BH:  It was there that Maya Angelou had her portrait installed in the National Portrait Gallery at the Smithsonian.  As she says in the film, “If only my grandmother could see this happen.”  It obviously meant a great deal to Dr. Angelou to receive this incredible honor.

What documentary films or documentarians have been the most influential to you?

RW:  On a contemporary level, Laurens Grant (who works with Stanley Nelson) has been personally very helpful.  Stanley Nelson’s films have shed light on our community from an important vantage point.  Ava Duvernay’s fiction film SELMA is a testimony to an African American female and her tenacity and perspective on work that needs to be in the culture.  I want to see more films from the cultures from which they emanate.  Every facet of the industry needs to actively pursue and support all cultures making films about their culture since no culture is monolithic.  We need access to the technology, the funding and the opportunities.

BH:  Along with HEARTS AND MINDS, I was deeply influenced by the films of Frederick Wiseman including HIGH SCHOOL and TITICUT FOLLIES, also Barbara Kopple’s HARLAN COUNTY, USA.  Those films taught me lessons of empathy and patience as a filmmaker that have stayed with me ever since.

I am sooo looking forward to seeing this next Friday! As she is the namesake for the charter school I have worked for since 2002, I have grown quite fond of her, her story, and the many opportunities I have had to be in her presence. She will always hold a very special place in my heart!