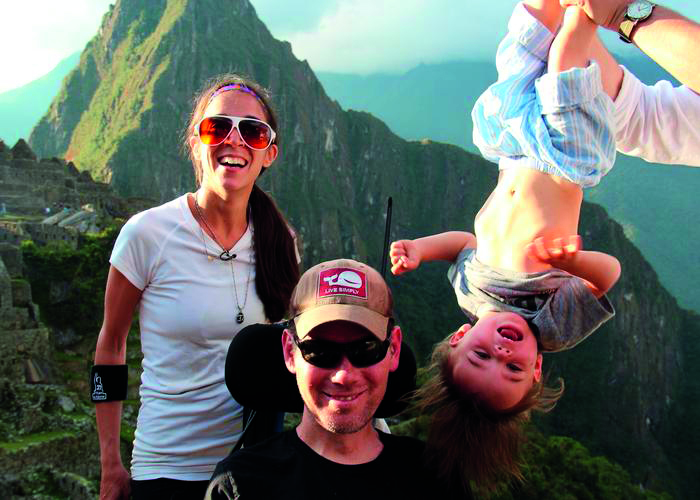 Steve Gleason was a star player for the New Orleans Saints before being diagnosed with a rapidly progressive form of ALS, commonly known as Lou Gehrig’s disease, at age 34. With their first child on the way, Gleason and his wife Michel confront their ever-changing new reality with unflinching honesty in front of the camera. GLEASON, a remarkable portrait of a man and his family dealing with a devastating disease, is by turns revealing, heartbreaking, humorous and undeniably human.

AFI spoke to director Clay Tweel ahead of the film’s AFI DOCS premiere.

What led you to documentary filmmaking?

What really led me into documentary filmmaking was my experience working on THE KING OF KONG: A FISTFUL OF QUARTERS (2007). I knew that I wanted to work in the film industry at that time, but I was working in various odds and ends jobs — whatever it took to pay the rent. When director Seth Gordon and producer Ed Cunningham asked me to come aboard KONG, it led to a three-year job of seeing that film through delivery. It was an amazing experience that showed me the power of non-fiction storytelling and the satisfaction involved in entertaining people through exploring great characters.

After I saw the first few minutes of footage that had been shot over many years on GLEASON, I knew how important and impactful the telling of this narrative could be. I met with Steve and Michel and they let it be known that the mission of the film was to reveal the day-to-day realities of this disease and its impact on families. There are so many families around the globe that have to deal with the care-taking of a sick loved one that we hoped this type of film could appeal to a large amount of people and give them inspiration, hope and solace.

How did you find the subjects in your film?

They found us! On behalf of Steve and Michel, producers Kimi Culp and Kevin Lake were looking for experienced filmmakers to craft the story and they reached out to producers Seth Gordon, Mary Rohlich and myself. While it’s a bit uncommon for a subject to seek out a creative team like this, we all feel an incredible responsibility to be given this opportunity and we are honored to be a part of telling such a powerful story.

What was a particular obstacle you faced while making the film?

I think there were two main obstacles. The first was finding a way to focus the film, cut it down and create a compelling narrative structure. We inherited 1,300 hours of footage that had already been shot when we came to the project, and there was a mountain of interesting moments. But in and of themselves, interesting moments without a dynamic structural arc would have trouble holding an audience’s attention, so we were determined to find a sequencing of material that fit our intentions for the film. On top of that, another challenge was to make a movie that went beyond a story about football or about ALS. We really saw the strength of the film resting in the interpersonal relationships and the idea of living life with a purpose. It was important for all of us to go beyond the audience’s expectations of what they would think the film would delve into thematically.

What do you want audiences to walk away with after screening your film?

I would personally like audiences to walk away from the film thinking about the purpose that drives them in their own lives, and perhaps with a renewed perspective and appreciation for what we might take for granted on a daily basis. ALS is such a difficult disease to watch progress; hopefully audiences will be inspired by the amount to which Steve succeeds despite his limitations. They will be in awe of the resilience of the human spirit that both Michel and Steve show in the film.

Why do you think Washington, DC, is a valuable location to screen your film?

DC is an important venue for GLEASON because we are trying to raise the public profile of ALS and this city holds a lot of policy makers that can ensure that happening. A small part of the movie deals with legislation around support for ALS patients, and we need to continue to ensure that these patients are offered the tools they need to not only survive but to thrive.